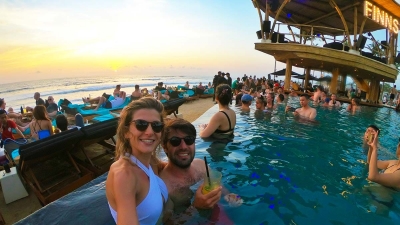 Bali stay and work latest updated information to obtain the legit permit for any activity without getting into trouble.

The single-entry visit visas of Indonesia below

B211A - among others: urgent and necessary work, social, family, tourism, non-competitive sport, short training course, business talks, to join with a a ship or aircraft in Indonesia, purchase goods, give lecture or attend seminar, international exhibition, attend a meeting in an office of your company in Indonesia, art and culture. Issued directly by Indonesian embassy or consulate without special approval.

B211B - among others: industrial process improvement for Indonesian companies, quality control, candidate for foreign employee. Plus everything allowed under B211A.

B211C - among others: for working as a journalist/film maker no work permit is required. Allows also activities in B211A 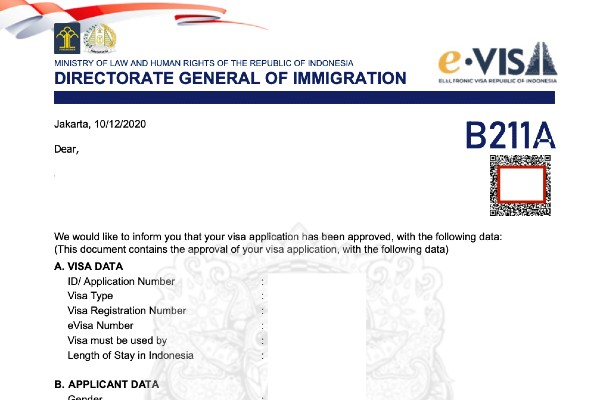 Then D212, which is the multiple-entry visit visa, which, is similar to B211A/B213, except it excludes: tourism, urgent work, non-competitive sport, join with ship/aircraft, training.

There is also the visa waiver, which is identical in activities to B211A/B213, except that it excludes: urgent work, non-commercial sport, short course/training.

The visa is legally an 'entry permit'. So your permission to enter as a visitor can come from:

b) an application at an overseas Indonesian embassy (or more recently online), with payment, which for B211B, B211C, or D212, will have been approved by the Directorate General, and for B211A, directly by the overseas post.

c) the decision of the immigration officer at the airport/border crossing/seaport, to waive the need for entry permit (a facility currently suspended due to COVID)

You are issued at the checkpoint with a 'visitor stay permit' (izintinggal kunjungan). This is distinguished from a 'temporary stay permit' (ITAS) or 'permanent stay permit (ITAP), which both give you the status of 'resident of Indonesia'. In the case of a visitor, then the activities that they can perform do include paid work; for example, the B211B visa is used by mines/other companies in Indonesia to hire (paid!) Chinese workers (now the most common foreign labour in Indonesia) for 2 months, before they decide whether to keep them on. Since that visa is issued for a 60 day period, with approval from the Directorate General, then there is no argument about the legality of those workers. Indeed, the company can ask Immigration to extend the stay permit up to 4 times, just as any other visa, if they can convince them they still need to test the capability of the workers before deciding to get a work permit for them.

Equally the 'urgent and necessary work' can be done just paying 500k for a VOA at the airport. Immigration have a duty of 'field oversight', and if they came and asked you questions, you could explain that 'I came here to do urgent and necessary work, where there was no time to arrange a work permit', and providing that everyone's explanations are reasonable, then nothing has been done wrong.

A 'multiple entry visit visa', could involve the visit visa holder making dozens of visits to Indonesia on behalf of a foreign company, for which they are paid by that foreign company, to meet suppliers, etc. This is all 'work' by any rational definition of the word.

But how about yoga instructors working on visit visas? They are breaking the law, aren't they?

Well yes, they might be breaking a number of laws:

Indonesia has many, many layers of bureaucracy, e.g., work place permit, business permit, therapist permit. If you don't have those then if you are an Indonesian citizen then nobody cares, and if they do care then there are no immigration sanctions appropriate to an Indonesian person.

Article 83 of the immigration law (6/2011) provides that a foreigner can be detained then deported where they do something which breaks laws (e.g., on business permits), or which threatens security and public order. (This is called 'administrative action'; it is not a criminal sanction, but an administrative one by immigration to 'take out the trash', in the form of a foreigner who, unlike an Indonesian citizen, is present in Indonesia only 'with permission'.)

Article 122 of said law further provides that a foreigner doing activities which are not in compliance with the 'purposes and objectives' of their stay permit, commits a criminal offence, which also makes them removable under Article 83.

In general, all capital investment in Indonesia in a business made by a foreigner is illegal except via PT PMA  Jasa Eka can help you establish a PMA), so this may also create issues.

In terms of 'volunteer' work, which is to say work not done for money, then the heading is 'social', which comes under B211A/visa waiver/D212/B213, i.e. it does not require any special visa at all. That said, the provisions of article 83 about 'public order' are important. I recall a small fundraising concert about 20 years ago, where the Indonesian organizers were seeking donations to put on a concert in aid of some disaster. The problem was.... the donations were going to pay the musicians and probably there would be nothing for the actual disaster victims. This scenario is very common, and whereas certain forms of performative altruism are popular in Indonesia (I'm sure this depends on the area, I'm speaking based on my personal experience), others are much less so. For example, an unrelated event (let's say a Motorcross meet-up) often invites 'anak yatim' (orphans) along and gives them some food, while at hari raya haji, animals are slaughtered and some of the meet is given to the poor, or a successful family may celebrate their success by offering food to all the neighbors, and so on. All of these are social norms in the concept of 'gotong royong', which is to say mutual cooperation, which may often only be extended to members of ones tribe and religion. In the context of a country with limited or non-functioning social welfare system, this makes perfect sense.

In the Western system, gotong royong makes less sense as the welfare state removes the mutual responsibility for members of one tribe and community, instead placing it in the hands of the government. From this place (the West) where hunger, healthcare, etc., are largely solved problems, you get Western people wanting to perform altruism in Indonesia, and other places. This is the product of a Western system, which is largely alien to Indonesian culture. This is where Article 83 comes in. A western voluntourism may see a good in helping others, without expectation of reward. A local resident may perceive a threat to public order.

Example: the government are building a large project locally. The police called the local preman (from the Dutch vreijman or freeman), and ask for several dozen PS (pemuda setempat), which is to say local youths, to obtain the building materials (sand, etc). This gives work to those people, and accrues various fees up the line. The fact that perhaps a job could be better done using  professional crew is not at all the point. The point is that there is a system, which gives work to local people, via people who command authority within their community. 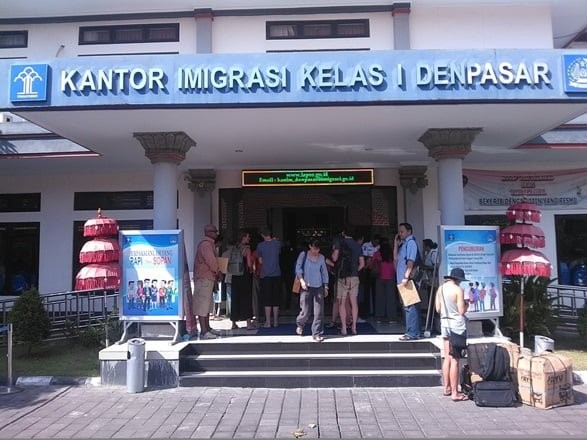 Where work is being done NOT in accordance with such local systems, then this creates an issue under Article 83, because local people can claim that there is disorder caused by the presence of a foreigner working for free.

As an example, a foreign musician who has legal status of 'visitor permit' in Indonesia, might be accustomed to receive $100 for working in his own country, and then he decides to jam for free with local musicians. This activity is not work, and is not illegal, but it is not in accordance with values and traditions in Indonesia, whereby it is not normal to work for free (as per the concert example). Indeed, the foreign musician playing for free is perceived by an unemployed Indonesian musician as an opportunity lost for him to work.

So when it comes to volunteer work, there are some things that can happen:

where a volunteer project involves local labor, where that labor is paid, or is able to extract money, beyond the going rate for the job (aka 'overpaid'), then this can create friction within the community as other people are jealous of the other locals being overpaid to do a job (whether or not they actually are, there seems to be an assumption that westerners will pay more than the going rate)where a foreigner is working as a volunteer for a project, when local labor could instead have been paid to do the work, that has potential to 'cause disorder'.

There are various solutions to this:

In the case of charitable activities, these have the potential to cause disturbance and it is best to establish a yayasan, which is a legal body, in accordance with Indonesian laws, so as to create a legal distinction between the person seeking to be altruistic, and the project itself. An ongoing project (handing out sacks of rice to the poor is not an ongoing project, but setting up a cat sanctuary is) that lacks a legally formed yayasan has no credibility at all. 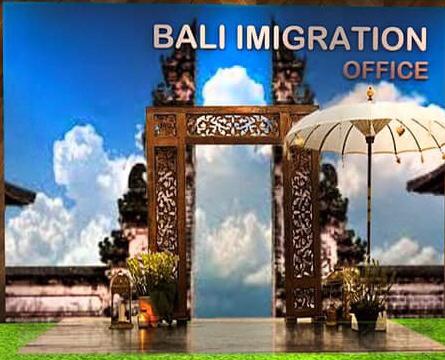 in the case of a foreigner wanting to perform volunteer acts as an act of 'voluntourism' as a visitor to Indonesia, then that is perfectly legal as a 'social' activity under visa waiver/B211/VOA, BUT the issue of local disturbance to 'public order' can arise. So in this case, the correct way to minimize the risk from immigration is to apply for a visa B211A specifically for 'social' reason, with a covering letter from a legal yayasan accompanying the application, explaining the activities that will be performed. This shows a level of respect to the laws, customs and norms of Indonesia, in that it is normal practice where for example a university faculty wants to make a visit to a museum, to first write a formal letter to the museum asking for their permission. The question of 'public disorder' can still arise for a foreigner working for a volunteer project, but where immigration perceives that THEY have been given respect in the form of a formal letter from the legally established yayasan, they are much more likely to reject the complaint of 'disorder' and accept the foreigner, since the (entirely legal) activity of volunteer work has been preceded by a respectful letter asking permission as a legal yayasan to invite a foreign citizen to volunteer. 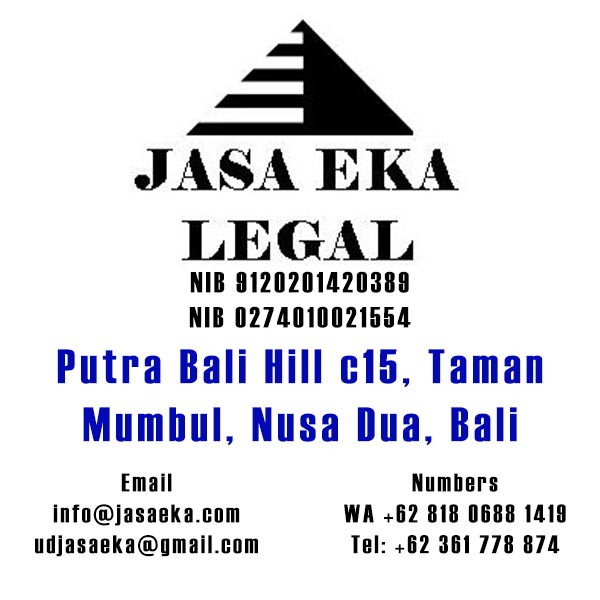 In the case of ad hoc work for free, such as playing music in a bar, then there doesn't seem to be a good way to avoid such complaints; if someone threatens to call immigration, then you can allow them to do so; if immigration then arrive, you can explain that you are not getting paid (including drinks, food, etc.) and that the music is 'social' in accordance with your visitor permit.