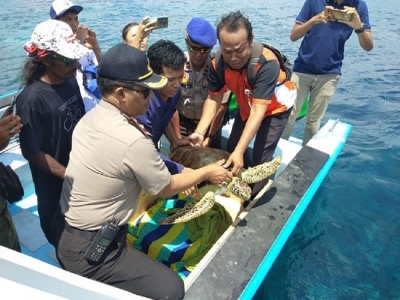 were finally released to the open sea in the waters of Ped Village, Nusa Penida District. 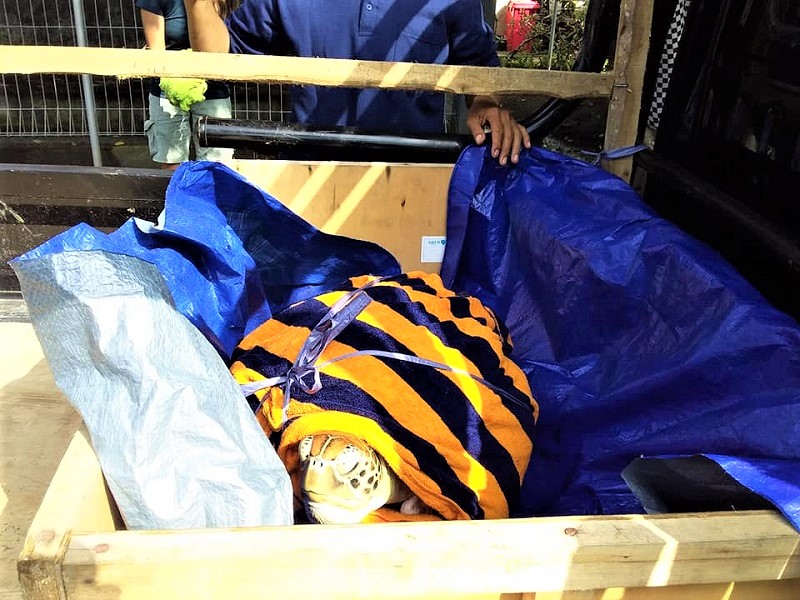 The released turtle consisted of three green turtles and one hawksbill turtle. .

"In total there are 27 turtles smuggled into Bali. Of the total 21 turtles were immediately released a few days after being confiscated.

While six turtles were collected at the Kurma Asih KPP and deposited at the Turtle Foundation in August 2018.

According to Eliza, the four turtled confiscated turtles suffered from papilloma, a type of tumor caused by the herpes virus.

One turtle came in a very weak condition and needed intensive therapy for 4-5 days.

"While other turtles undergo tumor removal surgery at the end of August 2018," he explained.

It was explained, during the treatment period the turtle did not want to eat fish or seaweed like hawksbill turtles that were enlarged in captivity.

These turtles only want to eat sea sponges like wild turtles on the high seas. While to get a sponge is quite difficult and the type of sponge each turtle likes is different.

"Because of this consideration we submitted to the BKSDA to release the turtle.

When released, the condition is already very good and his injuries have healed perfectly, "he explained.

According to him, turtle is still quite easy to find in the Nusa Penida region.

However, he could not ensure that this condition could last until when he saw the growth of the construction

of the pier which was quite lively and  the watersports in Nusa Penida could be considered  as a threat to the turtles.

In addition there are several other factors that can threaten the lives of turtles, ranging from global warming, the increasing number of plastic waste in the sea.

"The beach where the turtle hatches is not suitable for nesting. To lay eggs, adult turtles will return to the place where they hatched. While the ideal place (beach conditions) has been very difficult,