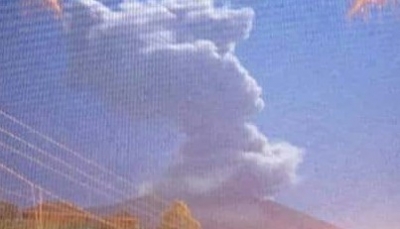 Observed from the eruption is high ash column observed lk.

Noted there is a maximum Amplitude 23 mm and 172 seconds

of the earthquake and the wind leads to the west.

"With the eruption tonight, I am still not surprised,

so we are still in Level III status, if the earthquake decreases,

the activity could be decreased, but it could be because

there is blockage and accumulation of energy in shallow depth,"

explained Head of Sub- Mitigation of Monitoring of the

Devy Kamil cautioned that eruptions do not always occur

when the earthquakes are the most numerous.

As in September-October 2017 and earthquake

to a thousand per day but the eruption actually occurred

at the time of the low earthquake in November 2017.