Australian robbed at sea by Pirates near Bali 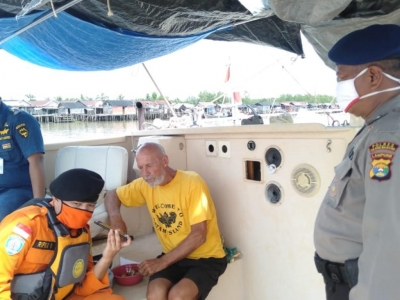 Aussie robbed at sea by Pirates near Bali and drifting 3 days sea at Tanjung Menjangan  after the horrifying incident on May 22 before he was rescued . The Australian man Tadeusz Nowicki, 70,has been rescued after being robbed by pirates on speed boats off the coast of Bali.He was alone of his yacht, named Hoopla, when up to ten pirates armed with guns swarmed him. They stole his GPS, boat steering wheel, communication radios, iPhone, passport, fuel, cash and food

He had managed to send off an Emergency Position Indicating Reported Beacon during the ordeal which notified the International Maritime Organisation.The information was then sent to the Australian embassy in Jakarta which launched the urgent rescue operation. After a three-day search, Mr Nowicki was found drifting off the coast on Kuala Telada.Lampung police spokesman Zahwani Pandra Arsyad said Mr Nowicki plans to return to Australia as soon as he can.

Aussie robbed at sea by Pirates near Bali