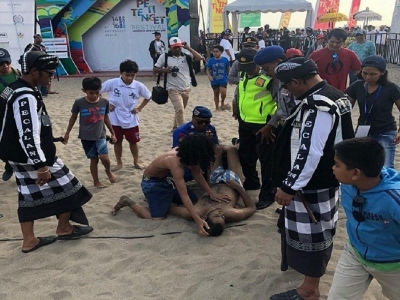 Several festival participants of the Petigenget Festival has been witnesses  the disaster of two domestic tourists from Jakarta. Rizki Achmadi Al, 25 and Calvin, 26. Two tourists from Jakarta, this Saturday (9/15) reportedly drowned in the waves of Batu Belig Beach, Petitenget, Kerobokan.

The drowning of two guests from Jakarta, occurred when the two victims were bathing in the beach. Next, during the wet, the waves immediately rolled and dragged both of them. "The victim was dragged by the first wave was Rizki Achmadi Al," Sendri said. Then, seeing Rizki dragged along, Calvin then took the initiative to help. But unfortunately he was also carried away by the waves. Luckily Calvin was quickly saved while Rizki Achmadi was not helped by his life.

"The victim on behalf of Calvin was being treated at the Ship Hospital, because he was in a state of shock," Sendri said. In addition to shock, from information obtained from the hospital, Calvin was also undergoing intensive treatment because his lungs were still fluid. Meanwhile, one death victim, Rizki Achmadi Al, is currently still waiting for the process of returning the body to Jakarta

Domestic tourists from Bandung, West Java, Kiky Baehaki, 23 died at Kelingking beach, Bungamekar village, Nusa Penida, Sunday (9/16) at around 2:00 p.m. Kiky died after being hit by a big wave while taking a selfie and had sunk for 30 minutes.

Nusa Penida police chief Kompol I Ketut Suastika confirmed the incident. According to him, the victim arrived at the beach with 10 of his colleagues at around 11:30. Arriving at Kelingking Beach, four victims fell to the beach and then followed the victim. "The victim bought a drink. After buying a drink, the victim and his friends swam on the beach for about 30 minutes," he said.

After swimming, the victim then takes a camera and takes pictures with his friends. Before the unfortunate incident happened, the victim and his friends were hit by the waves several times. But instead of being vigilant, the victim instead looked for the big wave moment to be the background of the picture.