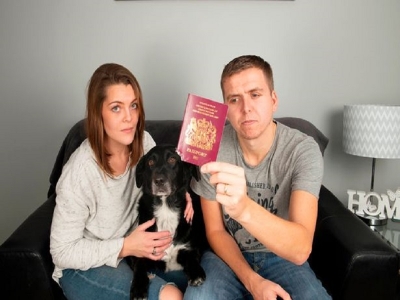 Daniel and Tia Farthing splashed out 5,000 USD on the once-in-a-lifetime trip to the tropical Indonesian island.

But they never even got out of the airport after officials decided the damaged document was not acceptable and put them on the first plane home.

They landed back in the UK at the end of a 15,544-mile round trip less than 48 hours after they had left.

And now their four-year-old labrador collie cross Milo – who nibbled a corner of Daniel’s passport as a puppy – is well and truly in the doghouse.Tia, 25, said: “He knows he’s done wrong because he’s been constantly coming to us for cuddles.“My father-in-law put on Facebook: ‘Due to events, dog for sale’. Now it’s hard to see the funny side.”The problem began when Daniel’s new passport came in the post four years ago.“Milo got to it first and chewed it,” said Tia.But chef Daniel used it to travel around Europe without any trouble.He said UK Border Force staff had assured him it would be fine for going to Indonesia as all the key details were intact.