and the tenacity of friends who responded to it saved their lives.

were driving back to their hotel in Ubud at around 2.30am

when a truck overtook them on a steep hill and blinded them temporarily.

was driving and he hit the brakes but they failed.

The pair, who had met in Thailand earlier in the year and agreed to meet back up in Indonesia,

They went over the edge of the road and into a ravine.

They found themselves unable to move, concussed and lying alone in the dark. 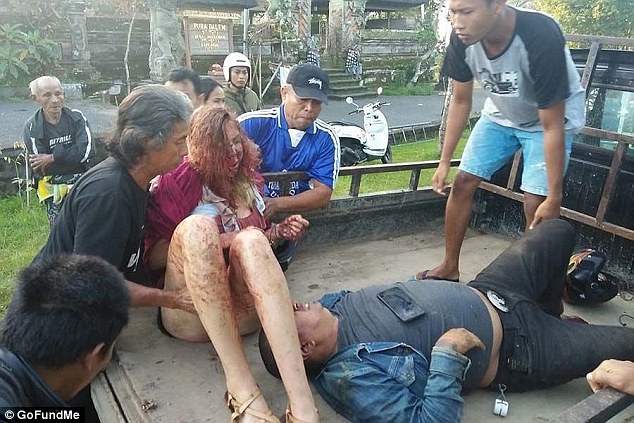 'I then did think "I'm gonna die here," because no one knew we were here or went over and

we were both hurt and for a minute I couldn't even remember how we got there,' Lythcotte told DailyMail.com on Friday.

In desperation, Lythcotte reached for his US phone which was still in his jacket pocket.

He turned on roaming and posted a Facebook message which read: 'Help. In danger. Call police,' marking his location just as 'Bali'.

Immediately, his hundreds of friends responded to ask what he needed.

He was only able to type with one hand and responded to them intermittently in the comments section, asking repeatedly for help.

Amy Sparks, a friend of his from Seattle, called him using the Facebook phone function.

'It was great that I talked to him because some people were worried that his phone had been stolen or that his account had been hacked.

'And I was able to say, I know his voice and I know it is him, that he is very badly injured and needs help,' she said.

Sparks was able to instruct him to then send her a dropped pin of his location to her via WhatsApp.

In their conversation, he wrote: 'Woods. By a river. Can't move.'

Sparks then took over leading the Facebook thread where dozens were by then asking how they could help.

Between them, Sparks and the others hammered the Indonesian authorities with calls

and bombarded the US embassy until they go through to someone who could help.

The embassy then phoned Lythcotte and told him help was on the way.

e the name of a hotel he remembered passing just before they crashed their scooter.

After around three or four hours, the pair were found by a team of local rescuers.

where doctors told them they had broken bones and concussions.

n hospital, they found out at a 5.2 magnitude struck when they were either crashing or unconscious in the ravine.

They do not remember feeling its impact.

A week after the accident, he returned to social media to thank his friends for saving his life.

'Hi everyone. I actually am sitting up now. Getting better daily. Even on my laptop for the first time today.

'[I] will have most tubes removed in a day or two, which will really allow me to move and get well.

'Yes, most pain is gone now. A good sign. And not to be gross but I'm eating and pooping normally.

Very good sign. They may try as early as tomorrow to stand me up!

'Your support has kept me sane. Thank you so much.' 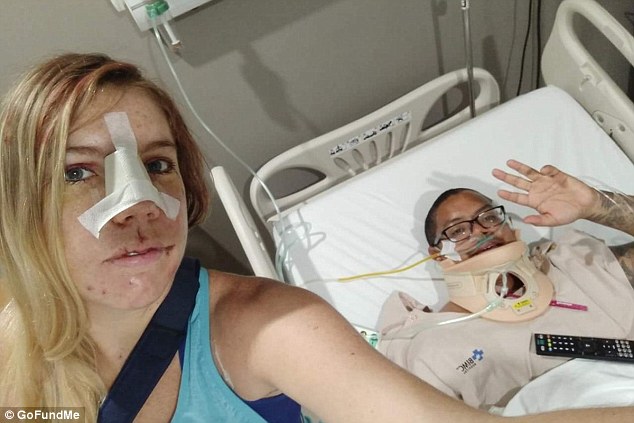 I'm still amazed people from all over the world made it work. I'm grateful beyond measure.

'Technology saved us. I was scared until we got a signal. I forced myself not to think about death.

I knew they were coming and they did,' he said.

Lythcotte remains in Indonesia and was in the hospital until September 3.

His brother has flown out to be with him and they will return to the US on Sunday.

Stacey, who is from Michigan, lives in South Korea where she works as a teacher.

Her family flew out to be with her after the accident and she has been able to return to South Korea since.

Both are relying on donations from two separate GoFundMe pages to pay for their medical care.