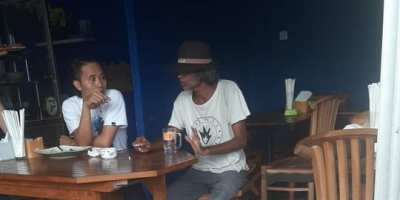 Currently, the foreign national from India is being held at the Satpol PP office and is being investigated. He was picked up after the shop's customers complained of thieves. It turned out that Pradeep Kumar also ate without paying.

The suspect who also ask the shop owner for money was already reported recently a few times and was left always before the police arrival . He was finally arrested and the Denpasar  police ( Satpol PP ). ) opened a investigation in Pradeep  to know since when he lived in Bali. Savoga also stated that he has  transferred to  the Denpasar immigration office .

He entered Bali on February 18, 2020 and then used a visit-free visa with passport that is valid until March 23, 2026. Pradeep is facing now deportation for 183 days overstay in Bali. He violated the  immigration rules and will be deported after he gets ticket money from his family as he  has not  enough money to buy a ticket to travel back to the country. Until there will  be availability of a flight schedule to Indi  he will be detained at the TPI Denpasar Class I Immigration Detention Center.