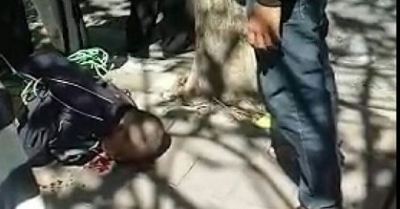 VIDEO Canggu snatcher died in Sanglah Hospital 4 days after he got beaten up by local crowd  on Friday June 12 th 2020 at Jalan Raja Canggu in Kerobokan.

Putu, the Balinese student walk out  the shop to store his laptop inside his car and returned to the shop and left the car unlocked. When he was inside the shop he observed a unknow person opening the car door and taking out a bag contained his laptop. Putu started screaming and  chasing  the suspected thief who attempting to flee the scene together with his college on a motorbike . Putu managed to pull down the suspect but his partner could escape. A group of local residents who witnessed the incident immediately starting to beating up Tono who got serious injured during the battleafter he was hit on his head  by a  unknow metal object.

Died 4 days after the incident

According the criminal Investigation police chief named Androyuan Elim . Tono was rushed to the Sanglah Hospital Denpasar after suffering from serious head injuries but died 4 days after the incident on Tuesday 16/06/2020at the intensive care section of the hospital, even  before he was operated.
He revealed, with the death of Tono , that the partner on the crime scene  is still on the run and cannot be identified and Tono was also suspected of  committing similar thefts in the  Kuta area

The police officer Iptu Andro had discussions  with the family to conduct autopsy . But the family members decided  finally to bring Tono's body  home for a funeral in Jember, East Java.