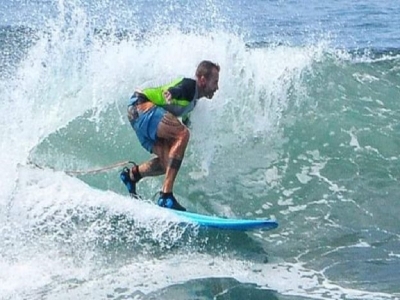 A British man who was arrested in Bali after being found with cannabis oil which he claims he needs for arthritis pain faces up to 15 years in prison.

Pip Holmes, a father-of-two from Cornwall, was one of five foreigners paraded at a news conference last week in Denpasar, the capital of Bali province.

Mr Holmes, 45, who describes himself as an artist and surfer, claims he was caught with just a tiny amount - around 3g - of medicinal THC oil, which he uses to treat his arthritis.
The father-of-two said he asked a friend to send him a small amount of cannabis oil while he was living in Bali, actions which he now recognizes were “foolish” and a “grave error of judgement”.Mr Holmes, whose children live back in the UK with his ex-wife, was arrested on December 3 by police in Indonesia after going to pick up the package sent from Thailand. Police claim the package was addressed to the British man, and an X-ray revealed that it contained two bottles with a yellowish, thick liquid nearly 31kg of cannabis oil.Cannabis oil is usually consumed orally, and has a very distinct taste.

This low-concentrate version of the oil is available to buy in the UK and is not illegal.Cannabis oil can be beneficial in a variety of ways, from helping promote sleep to boosting appetite and reducing stress, anxiety and depression.

Could get death penalty but will be  facing between five and 15 years in prison and is now raising the funds needed for legal representation, which his family say could get him into a rehab facility instead.

A message from Mr Holmes, who has access to a phone, on the crowdfunding site said he had already been moved from a cramped police cell in Bali to a rehabilitation centre and has been helped by messages of support from his family.

For the last few days, each morning I have woken up in a terrible nightmare. I still can't believe that I'm here and I feel sick with fear," he said.

As it stands, I don't know if I'm about to spend a few months in a rehabilitation or if I'm about to face five to 15 years in Kerobokan - one of the toughest prisons on earth."Mr Holmes said he had been in Bali for two months before his arrest.

It all went terribly wrong when I was arrested for possession of a tiny amount of THC oil. Stupid much? Yes very very stupid. Right now I feel helpless and very alone," he said. 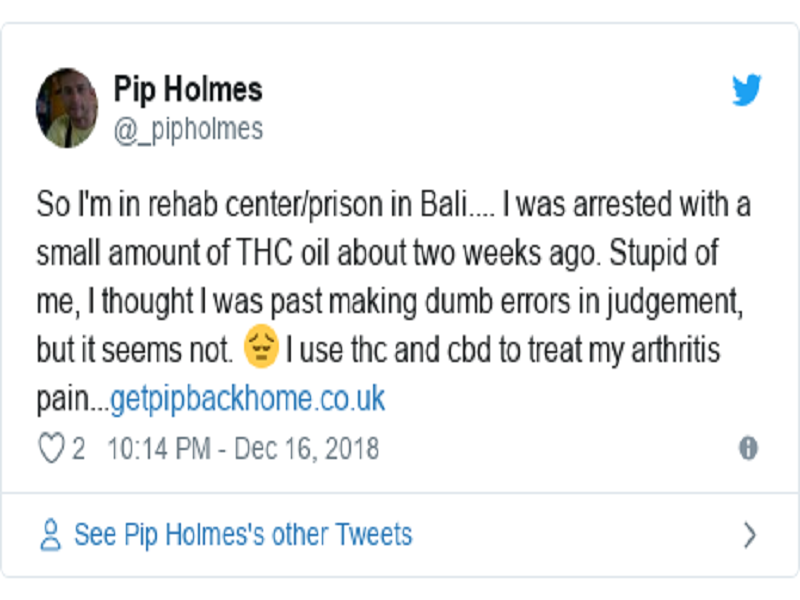 This is Asia, it's not like the west. I am guilty under Indonesian law of possession of narcotics, there's no denying that.

Even though medicinal THC is something so widely accepted elsewhere and it was such a small amount, I foolishly crossed the line in a very strict country.

The only way now to ensure my sentence is something I will survive is to invest in the right legal representation and rehabilitation."

Doctors have been able to prescribe medicinal cannabis products to patients in the UK since November 1 after the drug was rescheduled.

However, Indonesia has strict drug laws and dozens of convicted smugglers are on death row.

A Foreign and Commonwealth Office spokesman said: "Our staff are assisting a British man following his arrest in Bali, and are in contact with his family, lawyer and the Indonesian authorities."