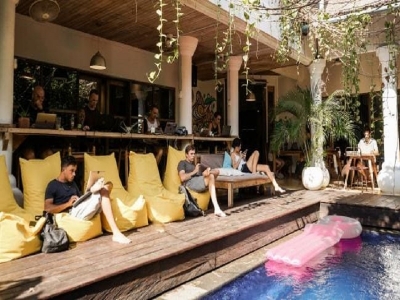 Nomad List founder Pieter Levels – a nomadic Svengali from Holland who earns $1.4 million annually and believes there will be 1 billion remote workers in the world by 2035 – says there are 5,000 digital nomads working in Canggu at any one time.

“Canggu is ranked number one because of its low cost of living – $1,863 a month – the weather is pretty good, there’s fast wi-fi, it’s safe and lots of fun with nightlife, restaurants, fashion and yoga,” he explains.

“You see, the biggest problem for digital nomads is loneliness. But in Canggu, you can fly right in and meet other digital nomads in minutes. I tried doing it in Tokyo and Los Angeles; it wasn’t easy. In Medellin [Colombia’s entrepreneurial hub] I couldn’t find good co-working spaces.”

While no longer shackled to cubicles, most opt to remain in their hometowns to be close to family and friends. But for those yearning to escape the repetitive lifestyle and high overheads of the West, continental Europe is their preferred destination followed closely by Asia, according to travel blog Gap Year Escape.

The city of Chiang Mai in northern Thailand has long been a digital nomad hotspot with a raft of co-working spaces, educational courses, conferences, social network and support services. Combining modern infrastructure and the allure of the Orient, Bangkok, Taipei and Seoul have also emerged as hubs for remote workers.

That’s not a problem one might encounter in Bali. There are dozens of co-working and co-living spaces on the island including nine in Canggu, up from only one only three years ago. “We’ve got 17 international schools in Bali and most of the kids’ parents are digital nomads,” says Smith, who last year opened a sleek library-like co-working space within Finns Recreation Club, his country club in Canggu. Smith’s next project is a lifestyle resort with 170 loft apartments geared at digital nomads.

“The lifestyle in Bali – it just all adds up,” he says. “This is obviously going to get bigger and bigger. 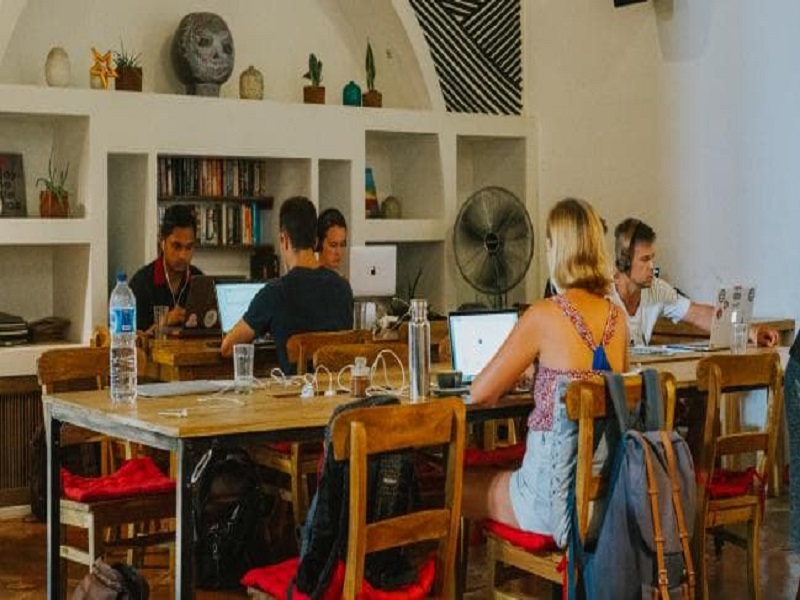 Canggu’s genesis as a paradise for the digital nomad harks back to 2015 when Michael Craig – a software whiz from Perth who taught himself to code at 15 and founded Clue, a multimillion software company at age 18 – bought an Internet cafe on Canggu’s Echo Beach.

Craig, who had been floating around Bali for a few years and was longing for a project with meaning, renamed the venue Dojo Bali and turned it into a Contiki version of a corporate office with Skype booths, meetings rooms, a smoothie bar and pool.

He also designed a dynamic calendar of events featuring talks with stalwarts like Pieter Levels, workshops on topics as diverse as artificial intelligence and crash courses in Indonesian language, hack-a-thons, barbecues, soccer matches and cultural tours – the building blocks of a skill-sharing community colloquially known as Silicon Bali.

“I had the idea that if you brought enough smart young people together in the same place they could bounce knowledge of each other the way people do in universities, create change and give back to the community,” Craig says.

But many of those who use the facilities at Dojo Bali have less lofty objectives.

“I’m less productive than I was working at home but this time is not just about working for me,” says Attila Cznayi, a web developer from Hungary. “Today I learned to ride a motorbike. I’d never done that before.”

Two years ago, the people hanging out at co-working spaces were more focused,” says Ahmed Hammad, a freelance data scientist from Italy.

“I’d say only about 10 per cent of digital nomads in Bali today are earning real money. The rest are just floating around and trying to make ends meet with ‘soft-tech’ – bloggers, Instagrammers, low-level coders and social-media managers – roles that are oversubscribed or being made redundant by automation.”

Hammad’s observation mirrors MBO Partners’ findings in the US. There, only one in six digital nomads earns $100,000 annually or more while one in three earns less than $15,000 per year.

Learn how my students are earning $430 or more per sale every day,” claims another.

Craig believes the proliferation of drop-shipping conferences in Chiang Mai sullied the digital-nomad movement in Asia.

“These guys charge $5,000 to teach you how to sell avocado slicers online. They target young people who want to escape Middle America and drink coconuts all day while working on the beach. But the reality is you can’t work on a laptop on the beach. And most of the money in drop-shipping is in selling drop-shipping courses.”

A recent report by Google and Singapore state-owned enterprise Temasek ranks Indonesia as the number one e-commerce market in Southeast Asia, with an eye-staggering $38 billion in online sales in 2018 – 38 per cent of the region’s gross total. Not surprisingly, drop-shipping courses are a dime a dozen in Jakarta and other Indonesia cities where wages remain stubbornly low and soft-tech appears to offer an easy way out.

In Canggu, e-commerce courses focus on ‘affiliate marketing’ – a business model that simply redirects customers to actual retailers and charges a commission for the lead.

However, Craig says affiliate marketing and drop-shipping are cut from the same cloth (“they’re businesses built around businesses”) while Levels describes such courses as “pyramid schemes”.

A former Emirates flight attendant from Australia who founded High Vibe Tribe, a series of affiliate-marketing retreats and podcasts, Karolyn Zinetti says affiliate marketers don’t work under others so calling it a pyramid scheme is false.

“With affiliate marketing, you make money every time you introduce someone to a product or service,” she says. “My five-step program teaches people how to create an online business and leverage the power of social media to really succeed.”

Fifteen people from 10 different countries attended Zinetti’s last half-day training course at the Tropical Nomad Coworking Space in Canggu. The course was free but attendees were invited to invest $142 per month to access Zinetti’s online platform to get a foothold in the industry

Lots of people come to Bali to follow their dreams but don’t make any money,” Zinetti says. “So I show them how they can travel the world and enjoy the lifestyle they crave instead of settling for a nine-to-five job in the suburbs. Using this method, I increased my income by a factor of ten this year – well into six-figure territory.”

Zinetti claims hundreds of her students have found financial success and agreed to share their contact details following our interview. This investigation does not assume the claim is untrue or that there is anything dubious about High Vibe Tribe’s courses. But despite various follow-up requests, those contact details were never received.

Beyond the questionable financial viability of working remotely in Bali are a raft of ethical and legal dilemmas.

“What I’m seeing more and more of is people simply designing their lives as cheaply as possible, avoiding income tax and not putting back anything into the community,” says Craig. “It’s basically a form of narcissism – choosing the path of least resistance – and they’re flying around the world non-stop so they’re environmentally unfriendly.

The legal status of digital nomads in Bali is another grey area as the overwhelming majority enter Indonesia on tourist visas.

“If they are working for foreign companies or individuals and doing all their research online or just talking with people overseas, then that’s okay,” says Philo Dellano, managing partner of PNB Immigration Law Firm in Jakarta. “But if they are gaining benefit from activities with businesses in Indonesia – it’s illegal if they do that on a tourist visa. That means anyone who is a blogger or travel writer or anyone who uses Instagram for commercial purposes, whether they get paid in cash or receive a free night’s stay at a hotel, they’re breaking the law.”

Indonesia’s Ministry of Immigration is aware of what is taking place in Canggu but lacks the resources to take action. “There are only 10 immigration investigators working in Bali,” he says. “They cannot possibly police so many people.”

One way Indonesia can solve the problem is with a new class of visa. Australia offers working holiday visas valid for up to two years for travellers aged 18 to 30. Germany offers a freelance visa that requires foreign workers to pay tax to the state. And Estonia, the digital powerhouse that gave the world Skype, will introduce the world’s first digital nomad visa later this year. Visa holders will not have to pay tax in Estonia so long as they pay tax at home.

“A digital visa for Indonesia would be a great idea,” says Levels. “When President Jokowi launched his plan to create 10 new Bali’s last year, he spoke of the importance of information exchange between Indonesians and foreigners. This country is craving tech workers.”

Craig concurs: “A digital nomad visa where you’re responsible for up-skilling or employing a local where you have cross-cultural exchange and learn from each other – that’s how to make a real Silicon Bali.

“Stop calling yourself digital nomads! I hate that word! Digital nomads are a group! How can you identify yourself as a group?” hollers Craig while standing on a table at Dojo Bali at a recent Friday night barbecue attended by 200-odd members. “You’re a copywriter or you’re a marketer or you’re a violinist who sells online tutorials. No one ever got paid to be a digital nomad!”

The crowd, an eclectic mix of millennials holler and cheer as Craig wraps up his sermon and announces the winners of a series of monthly awards including the hardest-working member, the most socially-active member and the member with the most altruistic project.

The winner of the latter category is David Simpson, co-founder of Beacon, a British startup producing CRM (customer relationship management) software that will help charities and not-for-profit businesses manage their databases without expensive third-party consultancies.