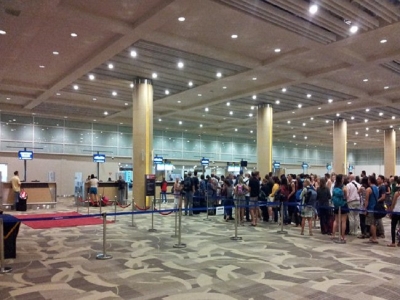 Besides arresting foreign nationals from Uganda, Congo, and Madagascar who were suspected of being involved in prostitution in Kuta, during the first quarter of 2019.

the TPI Special Class I Immigration Office Ngurah Rai also conducted immigration administrative measures of 40 foreigners from various country.Head of the Ngurah Rai Special Class I Immigration Office, Amran Aris, said on Friday (22/3/2019) that 9 foreign nationals who were prosecuted included 9 people, February 2 people (a Russian and a Canadian), and March as many as 29 people.Added, from the country of origin, a number of foreigners who were taken were from Australia, the Netherlands, Egypt, Italy, Britain, Russia, Bangladesh, Madagascar, USA, India, Chile, and France. The types of violations began from overstay, ex-prison and disobey the laws and regulations,.In addition, Arman said, from the results of supervision carried out by the TPI Ngurah Rai Special Class I Immigration Office on foreigners entering Indonesia, he stated that since January and February 2019 they rejected  entry permits for 205 foreigners from 40 countries with various reasons.The most issued citizens are from Bangladesh, Australia, USA India and China. The reason of refusel are  passport validity period was less than six months, or not have an RI visa or travel documents. Otler cased of  pedophilia, and are also refused because of other things, "he said.The government's decision to sell visas in order to bring in 20 million foreign tourists (foreign tourists) actually brings criminal problems in Bali  from a series of robberies and ATM burglaries, the perpetrators are foreign nationals. Head of Immigration Class I Denpasar Wisnu Widayat said his party had made various efforts related to the supervision of foreigners.One of them is by forming Timpora at the sub-district level in accordance with the order of the Law on Supervision of Foreigners.The formation of Timpora in each sub-district to facilitate supervision of foreigners coming to Bali,said Wisnu Widayat. If there are individual tourists found to take actions that need to be taken action immediately reported to immigration. Later immigration will follow up.He argues that many foreign tourists who violate the law in Bali are one of the negative sides of giving visa-free visits, aka visa on arrivalHowever, this cannot be a problem because it has become a government decision. The point must be to increase supervision.Because tourists are given visa free for vacation, but some are misused. Like a recent robbery case, since January - March, Immigration had taken immigration administration to 14 foreign tourists,and immediately deported because the entry is in detention.