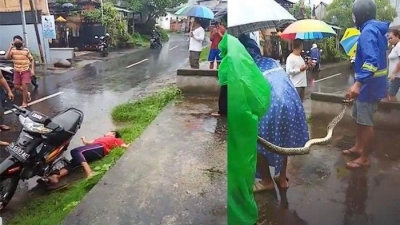 Gusti Ngurah Bagus Permana (16) who is still a student but considered by his  mother as a professional snake catcher had bad luck when he captured another  python. He wrapped the dangerous snake around his neck while driving on his motorcycle and felled down in front the Dalem Majapahit Temple, Jalan Kresna,  Semarapura Village .Klungkung. He got nearly strangled and could hardly breath any longer .The residents who witnessed the scene from the beginning  did not want take the risque to help the victim. They went down to the village to ask for help while other residents who came to the spot holding  the snake's head while the tail  went inside the nose of the victim. Finally approx. 15 minutes later the Ambulance arrived and came to bring  the victim to the hospital and snake was secured at the Klungkung Regional Police Station,