Powerfull 7.1 earthquake with epicenter at Lombok Rinjani, tsunami warning and damage in Bali 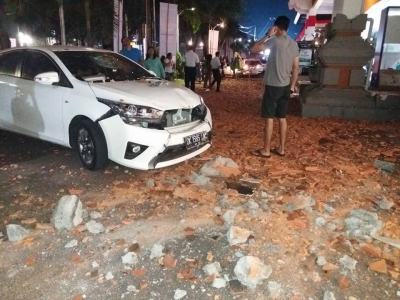 First reports of this  latest earthquake was felt in almost all parts of Bali and several schopping mall  on Denpasar Sunset road should have been dammaged.

This strong shock is enough to make people worried and run out. They were alarmed because the earthquake was bigger this time than the earthquake that shook on july 27 th /2018 . 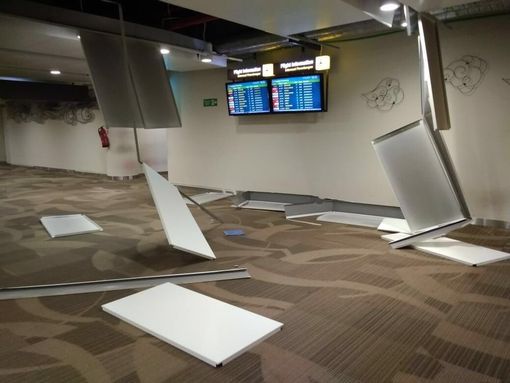 Many residents remain silent outside the home because they fear the earthquake will continue. "

This earthquake was louder than the previous quake," said Atik, who invited his family to wait for a quake outside the home.

People have been told to stay away from the sea over fears of a tsunami. Dwikorita Karnawati, head of the agency for meteorology, climatology and geophysics, told local TV:

‘Please go to a place with higher ground, while remaining calm and not panicking.’

Elderly men leave their nursing home to go to world's biggest metal festival It was even stronger than an earthquake last week that measured 6.4 and killed 17 people in the regio

a depth of about 10 Km. The largest earthquake strength reached 7.1 SR 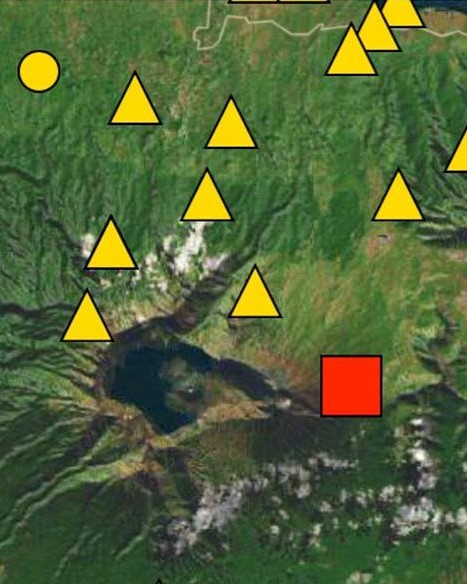 n. It struck at a depth of just six miles (10.5km) and its epicentre was about a mile east of Loloan.

Eyewitnesses said a number of aftershocks have rattled parts of Indonesia after the initial quake.People ran out of houses

All the hotel guests were running so I did too. People filled the streets. ‘A lot of officials were urging people not to panic.’ 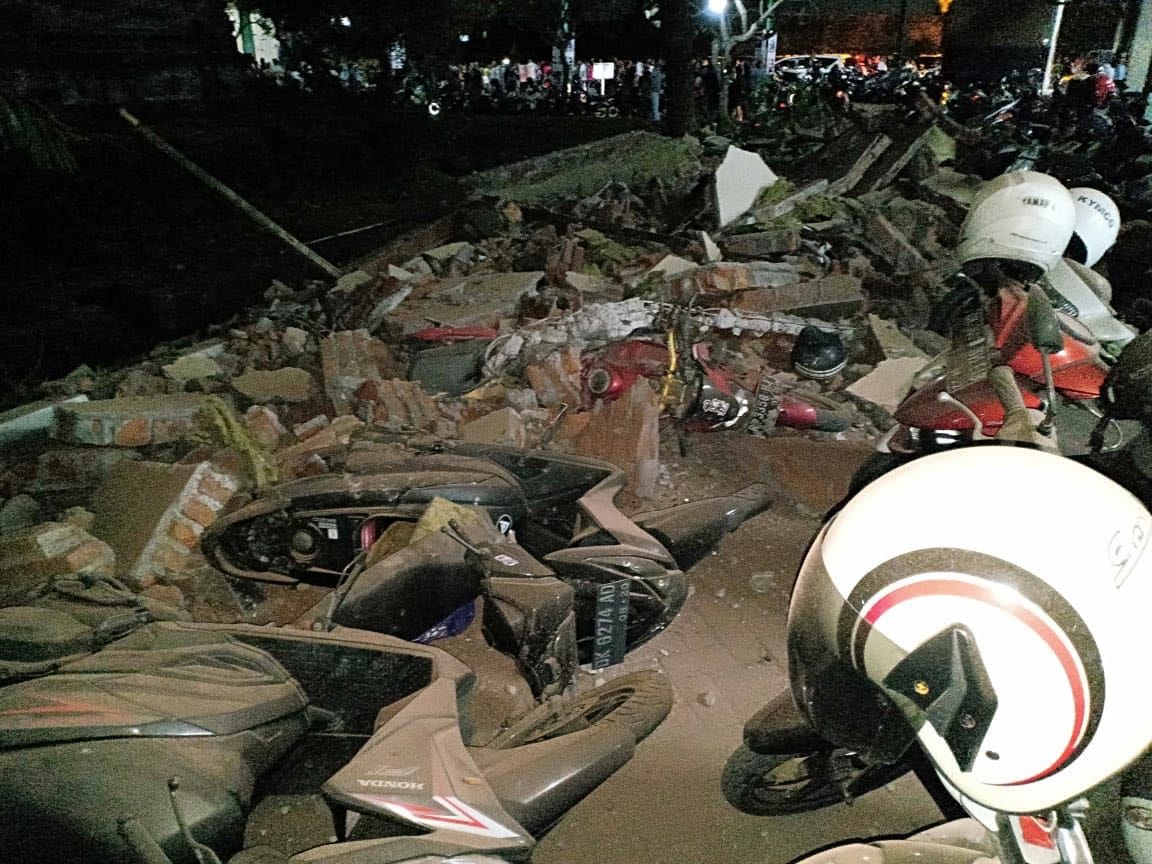 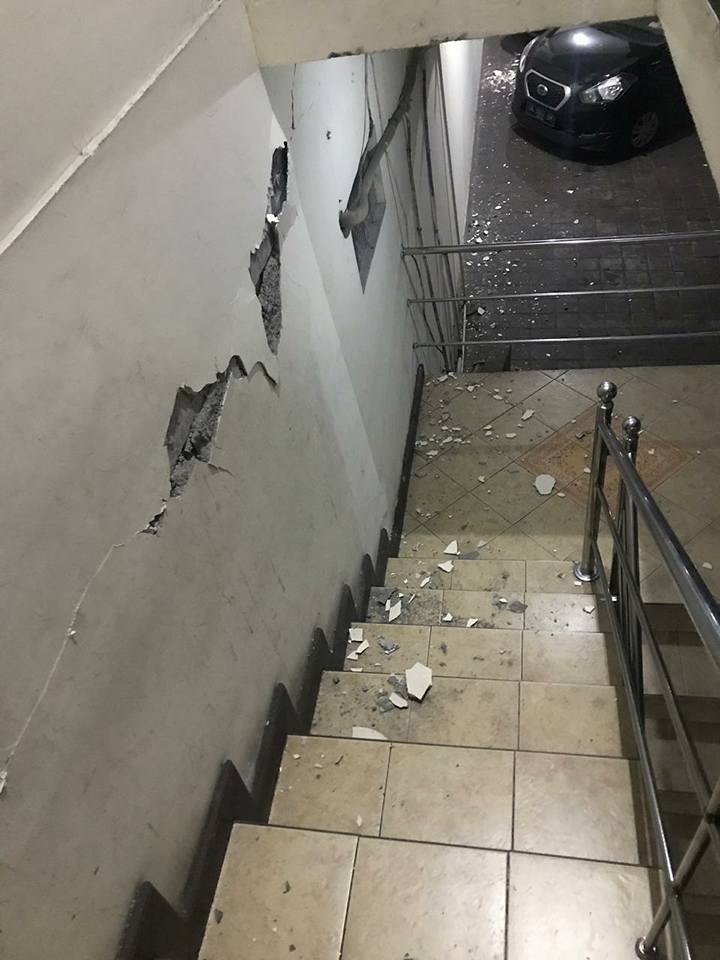 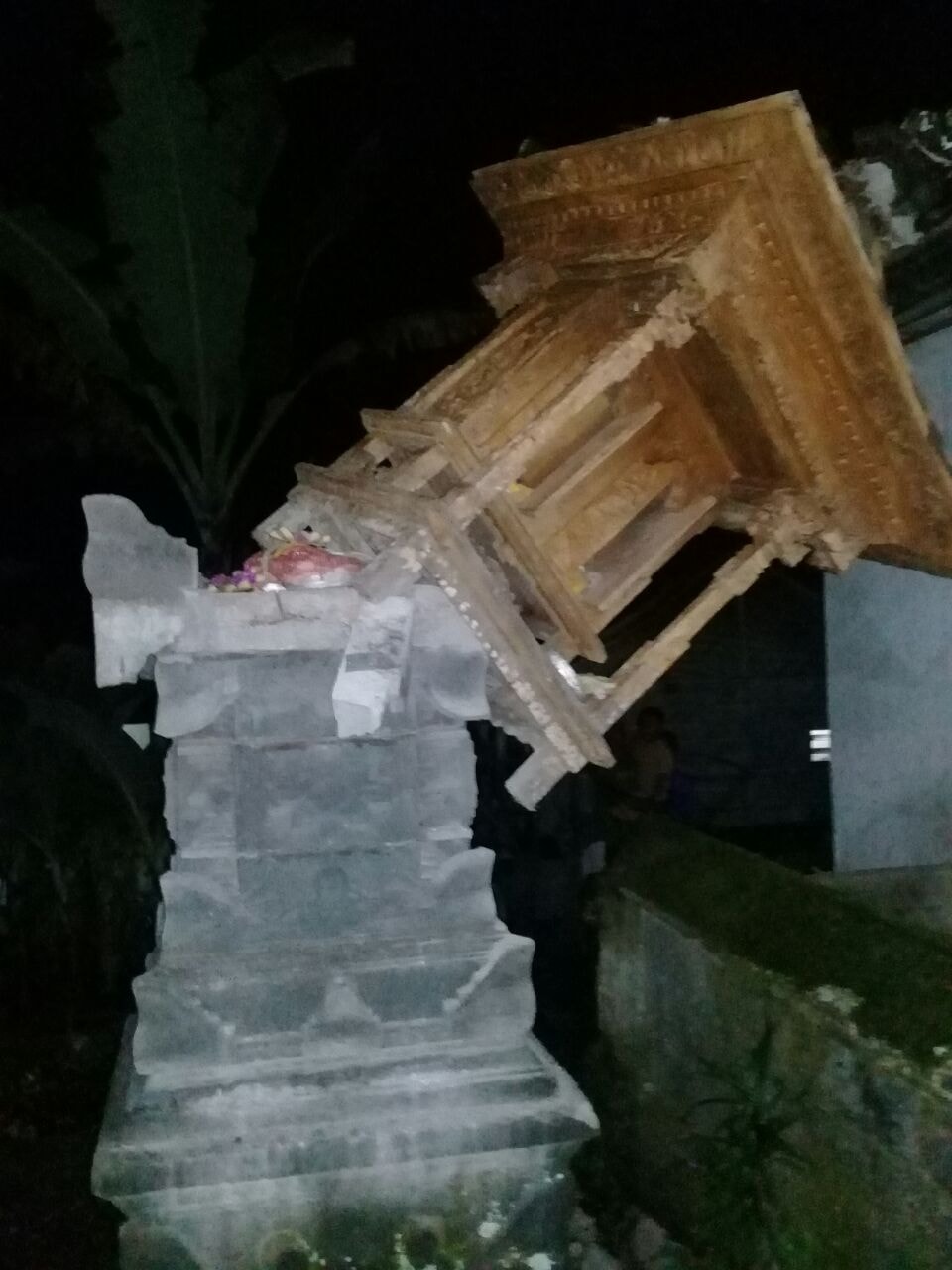 Update on Monday 6 August 2pm on Lombok and Bali

(evacuation of 1,000 tourists this afternoon from Gilli islands)

Death toll from Lombok quake yesterday climbing towards a hundred, with 2 deaths in Bali, the others in Lombok - and unconfirmed reports the death toll may be as high as 142.

The earthquake a 7.46pm Sunday 6.9-7.0 on Richter Scale, and left hundreds injured, and thousands of people living outside, with widespread damage in parts of Lombok, particularly eastern, northern and around Mataram city. Many people on Lombok fled to safe places, while many in islands such as Gilli islands evacuated to higher ground, fearing a tsunami. A tsunami warning was issued, but an hour or so after the quake it was lifted.

According to the Meteorology, Climatology and Geophysics Agency (BMKG), the earthquake was felt at 7:46 p.m. local time with an epicenter located 18 kilometers southwest of East Lombok with a depth of 15 km.
The agency initially placed the northern part of East and West Lombok on a tsunami alert soon after the quake but the alert was revoked at around 9:30 p.m. local time.

“Tsunami waves did hit the coast, but only at a height of 9 to 13 centimeters. The waves didn’t cause damage or casualties,” National Disaster Mitigation Agency (BNPB) spokesman Sutopo Purwo Nugroho said in a statement on Sunday.

Most of those who died, were hit by collapsed buildings, according to the authorities and NTB Province BPBD. Most the deaths were in northern Lombok.

Emergency services, including the Indonesian military, have been involved with evacuation and response, with mobile units of Red Cross and other medical services team providing first aid and emergency supplies.

Aftershocks continue and are widely felt, including across Bali. The previous week there had been an earthquake in a similar location, though yesterday’s quake was far more strong and severe. Some buildings which had been damaged in the first quake were further damaged, with some collapsing. There was widespread panic as many fled outside buildings onto the streets, with the initial tsunami warning further leading to panicking and trauma.

On the Gilli islands there were also reports of panic, as fleeing visitors made to higher ground, fearing a tsunami.

On Lombok many injured were treated outside hospital and clinics, with emergency lighting and generators being brought into operation to provide light and electricity. Much of Lombok was without electricity.

On-going aftershocks rocked Lombok and have been felt across Bali, with around 50 in the 12 hours after the initial quake.

BMKG stated that the 7 SR earthquake was the main earthquake (main shock) from the previous series of earthquakes. This means that there is a small chance that aftershocks will occur with greater strength, "said Sutopo Purwo Nugroho, Head of the Information Data Center and Public Relations of BNPB in his official statement Monday morning.

According to him, the joint SAR team continued to evacuate and sweep. Nighttime conditions and some disabled communications caused obstacles in the field. It is estimated that the victim count continues to grow. The amount of damage to the building is still being carried assessed.

Schools are closed until the 8th August in parts of Lombok to allow the assessment of buildings.

++++++
The quake this Sunday and last weekend has NOT impacted on Agung volcano, and there has been no increase in activity or response to the event. The quakes have been relatively shallow, less than 10km deep.

It is likely there may be more aftershocks in the days to come, though of less severity.

We understand there is the evacuation of visitors off the three Gilli islands to a safer place starting from this morning and afternoon.
So far 1,000 have been taken off the islands.

Video footage of many waiting for boats for evacuation, as some fast boats have not been operating in the last week due to high seas, and there are some stranded on the islands, close to Lombok.

Reminder that life goes on in Bali and Lombok, and that the footage you might see on TV is from the worst-hit areas. There are part of Lombok which have not been impacted greatly by the quakes. Throughout most areas where tourists are in Bali, there is no impact, and holidaymakers are going about their everyday sightseeing and activities without hinderance or fear.

This is a reminder to be aware, and prepared.

Have you got some emergency supplies, such as food, water, first aid, torch/flashlight, battery backup, in case you have to be self-sufficient for a day or more?
Do you know where your vital documents and devices are?
Do you have an escape plan with your family and friends?

You might think to go outside or in the doorway, but:
Stay inside until the shaking stops and it is safe to go outside. Do not exit a building during the shaking. Research has shown that most injuries occur when people inside buildings attempt to move to a different location inside the building or try to leave.
Do not use a doorway except if you know it is a strongly supported, load-bearing doorway and it is close to you. Many inside doorways are lightly constructed and do not offer protection.

If an earthquake happens, protect yourself right away. Drop, Cover, then Hold On!

If in a vehicle, pull over and stop.

If in bed, stay there.

Do not get in a doorway.

Do not run outside.

This is from the Canadian dept of public safety and emergency preparedness:
What to expect during an earthquake

These can last only a few seconds and represent no emergency risk.
Ceiling lights may move and some minor rattling of objects may occur in your home.
You may feel a slight quiver under your feet if you are outside.
If you are close to its source, you may hear a loud bang followed by shaking.
Large earthquakes

These can last up to several minutes and constitute a natural disaster if its epicentre is near a densely populated area, or its magnitude sufficiently large for the region.
The ground or floor will move, perhaps violently.
Whether far away or close to the source, you will probably feel shaking followed by a rolling motion, much like being at sea.
If you are far away from the source, you might see swaying buildings or hear a roaring sound.
You may feel dizzy and be unable to walk during the earthquake.
If you live in a high rise or a multi-storey building, you may experience more sway and less shaking than in a smaller, single-storey building. Lower floors will shake rapidly, much like residential homes. On upper floors, movement will be slower but the building will move farther from side to side.
Furnishings and unsecured objects could fall over or slide across the floor or be thrown with damaging force across the room.
Unsecured light fixtures and ceiling panels may fall.
Windows may break.
Fire alarms and sprinkler systems may be activated.
Lights and power may go off.

Wherever you are when an earthquake starts, take cover immediately. Move a few steps to a nearby safe place if need be. Stay there until the shaking stops.

If you are indoors: “DROP, COVER AND HOLD ON”

Stay inside.
Drop under heavy furniture such as a table, desk, bed or any solid furniture.
Cover your head and torso to prevent being hit by falling objects.
Hold on to the object that you are under so that you remain covered. Be prepared to move with the object until the shaking has finished.
If you can't get under something strong, or if you are in a hallway, flatten yourself or crouch against an interior wall and protect your head and neck with your arms.
If you are in a shopping mall, go into the nearest store. Stay away from windows, and shelves with heavy objects.
If you are at school, get under a desk or table and hold on. Face away from windows.
If you are in a wheelchair, lock the wheels and protect the back of your head and neck.
If you are outdoors

Stay outside.
Go to an open area away from buildings. The most dangerous place is near exterior walls.
If you are in a crowded public place, take cover where you won't be trampled.

AVOID the following in an earthquake

Doorways. Doors may slam shut and cause injuries.
Windows, bookcases, tall furniture and light fixtures. You could be hurt by shattered glass or heavy objects.
Elevators. If you are in an elevator during an earthquake, hit the button for every floor and get out as soon as you can.
Downed power lines – stay at least 10 metres away to avoid injury.
Coastline. Earthquakes can trigger large ocean waves called tsunamis. If you are near a coastline in a high risk area during a strong earthquake

, immediately move inland or to higher ground and remain there until officials declare the area safe.

From the US Ready.gov
Be Safe AFTER

Expect aftershocks to follow the largest shock of an earthquake.
Check yourself for injury and provide assistance to others if you have training.
If in a damaged building, go outside and quickly move away from the building.
Do not enter damaged buildings.
If you are trapped, cover your mouth. Send a text, bang on a pipe or wall, or use a whistle instead of shouting so that rescuers can locate you.
If you are in an area that may experience tsunamis, go inland or to higher ground immediately after the shaking stops.
Save phone calls for emergencies.
Once safe, monitor local news reports via battery operated radio, TV, social media, and cell phone text alerts for emergency information and instructions.

Use extreme caution during post-disaster clean-up of buildings and around debris. Do not attempt to remove heavy debris by yourself.

Check out this visual list of what not to do:
https://www.cbsnews.com/…/earthquake-nine-things-not-to-…/2/

Even though your response might be to run out, for fear of building collapsing, the biggest danger might be as you exit a building, with falling debris and wires. Running isn’t recommended either.

If you need to find new accommodation sometimes better online than rack rate if you turn up. Use this link, and you’ll get US$15 after your trip. https://www.booking.com/s/43_4/684132a6

To donate to help
https://fundrazr.com/LombokEarthquake…