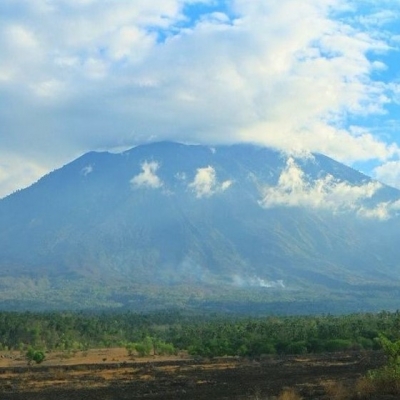 what has the last days expected has been finally announced ON 10/02/2018 by the Minister of Energy and Mineral Resources Ignasius Jonan who announced this decision Saturday morning following a meeting with the Disaster Mitigation Agency (BNPB) and the coordination of observation posts Karangasem .

) said the decline of Gunung Agung status from alert level to alert level after seeing the development of volcanic activity. During this month continued to show downward trend. "So from today the status of Mount Agung officially lowered from alert level to standby. As for the radius of the estimate of danger also decreased from 6km down to 4 km from the crater, "he said.

Jonan added, with the downgrade of this status it hopes for all citizens who are currently still displaced in order to be repatriated immediately to their respective homes. That way, all forms of community activity maupaun tourism can return to normal.

As for the process of Returning the refugees his side has instructed provincial and local governments to instruct their personnel to be able to convey this to the head of sub-district, perbekel or kadus in each village. So that can convey to all citizens who are still evacuating to go home.

Head of PVMBG Kasbani added, based on monitoring results of Gunung Agung activity through a number of tools used to monitor the mountain so far, since last month continued to show a significant decline. So now the potential for 4 km of hazard estimates ranging from vijar stone and volcanic ash.

"The potential for eruption still remains. Only a small eruption is not as big as before. Including the potential of rain lava still occurs through the river valleys from upstream. While at a radius of 4 km it seems there is no settlement citizens. After all, if there is still they can perform activities as usual just remain vigilant, "the message.

Head of BNPB Willem Rampangilei explained, for the mechanism of repatriation of refugees pascaditurunkannya status of Mount Agung duty it has instructed the provincial government officials, including Bali BPBD region in order to repatriate all to evacuate their respective hometown. "So we will also make preparations if there is a damaged house and infrastructure will soon be restored," he said.

Vice Regent of Karangasem I Wayan Artha Dipa stated that his side will facilitate all refugees to return to their hometown. Included in the repair of damaged road infrastructure will also be handled in cooperation with the central and provincial governments