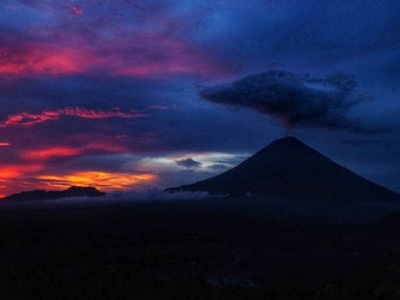 Gunung Agung erupted again on Thursday 10/01/2019, but from the Gunungapi Agung Observation Post it was stated that the ash column height was not visible caused by fog .
The eruption was recorded on seismograms with a maximum amplitude of 22 mm , during 4 minutes, 26 seconds . In addition to ash with an altitude of 5,400 meters above sea level that blows into the air, throwing material also appears in the form of gravel, ash and sand and blowed ash rain in the direction of ​​Singaraja City, a number of residents riding motorbikes felt pain in there eyes, as well as a number of parked vehicles exposed to ash.

Komang Adi Jaya, a resident of Banjar Bali Subdistrict, did not hear about of the eruption of Mount Agung, but on the way from Penarukan to his house felt pain in her eyes. "Yes, when I returned home from the staging, the eyes were sore. .A similar statement was expressed by Ayu from Sudaji Village, where the exposure of Mount Agung's ashes can be seen clearly from the motorcycle seats and helmets parked in the yard, even a slightly gray colored ash is also seen on the terrace of the house.

The ashes look like rain drizzle and clearly visible on the motorcycle seat, helmet and also on the house, it was swept away and thrown away, long enough it also rained ashes from Mount Agung,