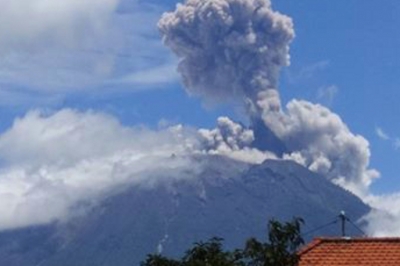 Today Febr 13 th 2018 , only 3 days after the alert status has been lowered, there is surprisingly  another eruption on Mounth  Agung

And it does what Agung tends to do - act unpredictably.

Orange VONA aviation advisory, but airport open and flights all going, and ash unlikely to impact on any flight paths or plans.

The eruption just before midday sent the ash column some 1.5km into the blue Bali sky, and it skewed a little to the east/northeast.

There was also an earthquake, which was felt closer to the volcano.

Status for Agung remains III (3) which is standby. Which is what you could do.

There are many evacuees in camps around eastern Bali, but many have returned home, and from the weekend, with the reduction of the danger zone,

all inhabitants were allowed to return to their homes and farms. Could be some ash fall east-north east of Agung.

the eruption was accompanied by a column of smoke and ash about 1,500 meters above the peak.

In case you were wondering, as far as we can tell, insurance companies still aren't covering Agung-related travel disruption, understandably so.

Keep cool. Have your mask, as well as sunscreen and an umbrella for Bali as it is still rainy season.

(If this is the first time to this page or alert, this is no big deal, Agung has been venting for months, off and on.

This is the nature of volcanoes, and the reality of being in Bali.)