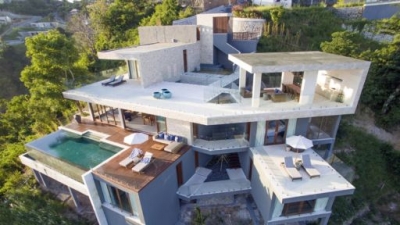 Bali luxury villas discounts up to 85 % with a private pool, tropical gardens and a large terrace overlooking a lush green river valley in central Bali.  Kadek Wisana's three-bedroom villa usually goes for $100 a night. Now Wisana has slashed the rent to $400 a month, and still he can't find tenants, with over three-quarters of Bali's 100,000-strong expat population fleeing in the wake of the coronavirus pandemic, which has devastated the Indonesian resort island's tourism industry. "Business was good," said Wisara. "It was occupied most of the time until the coronavirus stopped tourism."Wisara is one of scores of Bali villa owners offering discounts of up to 85% in a desperate bid to earn even a small amount of rent to help pay the bills.

The roughly 4,000 luxury villas on the island -- more than any other Asia-Pacific location, according to a 2019 report by villa-finder.com -- fetched an average of $220 per night before the onset of the pandemic.But double-digit rental yields and astronomical capital gains may be a thing of the past.

One four-bedroom whitewashed Spanish-style villa in the beachfront enclave of Seminyak, which comes complete with housekeeping staff, is now being offered for $1,100 a month, while the owners of a two-story townhouse in Ubud are asking for $500 a month. Last year, both properties fetched more than three times as much.

t," said Bill Barnet of C9 Hotelworks, a market research firm based in the Thai resort of Phuket. "Asian economies like Taiwan and South Korea will follow because they are much less sensitive to pandemics than the West. But with Australians -- the island's second-largest source of tourists and the most common renters of villas -- not even allowed to leave Australia before the end of the year, and Europe also still reeling from the impact of the pandemic, others are not so optimistic.

"You can't even get on a plane now, and when you can, people will think long and hard about holidaying overseas," said Georgeson, who is now back on Australia's Gold Coast after he followed Australian government warnings to return home. "The best case for a partial rebound in Bali is at the end of the year. Beyond the supply-side questions is the more far-reaching issue of how the pandemic will play out in Bali itself, which has recorded only around 400 COVID-19 cases and four deaths.

But with one of the world's poorest testing rates -- only 940 tests per million in Indonesia compared with 5,380 per million in Thailand and 16,121 in South Korea -- medical experts say it's difficult to explain the low infection rates.

In a worst-case scenario, Bali's property market may start to recover only once a vaccine becomes widely available up to three years from now.But in a local economy that depends on tourism for up to 80% of its revenue, such a lengthy economic hibernation could trigger a wave of panic property sales.We can't say anything has crashed yet," said Georgeson. "That may change if lots of owners start having issues with cash flow in their home countries. But for now, I just see people sitting back and waiting. The Royal Villa at the Four Seasons Resort in Ubud, where Julia Roberts stayed while filming "Eat, Pray, Love" in 2009.
Investment consultant Nilsen said some cracks in the market are already starting to show.

"A few people are telling us they need to sell," said Nilsen, adding that other crises such as the 2002 Bali bombings and active volcanoes have shown that some expats will always be overexposed.

Looking ahead to a post-COVID-19 world, Bali may find itself the destination of choice for a new class of digital nomads who have glimpsed the benefits of working from home and don't want to go back to working in an office.

"Digital nomads are the key market that emerged from our recovery meetings with my partners," said Will Meyrick, a Scotsman who owns various restaurants and villas in Bali. "When all this is over, a lot more people will want to live outside of cities in places with warm climates like Bali."

In the past, we have seen Jakartans with large amounts of cash coming into the market to take advantage and buy up, but this time could be different because Jakartans have been affected, too," he said.