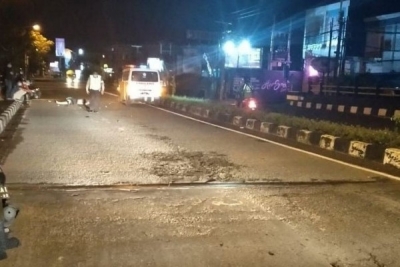 Alleged drunk motorcycle driver from the UK killed on the Jalan Teuku Umar Barat bridge on Wednesday morning (01/13/2021)  at 1:45 AM. The English foreigner Argent David (28), died on the spot after hitting the road and lost his helmet from the severe fall with his Honda Vario motorbike.

Medical staff  from the Denpasar City PMI and Denpasar Police officers arrived at the scene within minutes but could unfortunately not helping the victim who was bleeding from the mouth and nose.  victim instantly died at the scene. According the Police officer Iptu I Ketut Sukadi, the victim's mouth had a smell of alcohol and lost control while driving due to the influence of alcoholic. Argent David lived in Villa Waterlily on Jalan Camplung Tanduk in Seminyak, His bodies have been evacuated to the Sanglah Hospital in Denpasar.